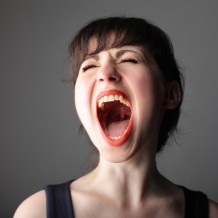 What are vocal nodules?

Vocal Nodules are broad-based, thickenings or tissue masses at the mid point of both vocal folds. They occur almost exclusively in young women and also pre-adolescent boys. They are also sometimes known as “screamer’s nodules” which alludes to the general consensus that they are related to “phonotrauma” i.e. the physical stresses placed upon the vocal fold with heavy, excessive or strenuous voice use.

Vocal Nodules are commonly seen in people who use their voice consistently in a loud background environment. Examples include teachers, actors, politicians and singers. Musical theatre singers seem to be particularly prone to vocal nodules and it is not known whether this is due to the style of singing or the intensity of the performance schedule.

Vocal Nodules are not cancerous or pre-cancerous. The characteristic symmetric appearance and location of vocal nodules in younger people and their good response to appropriate therapy should remove any doubts about malignancy and remove any need for biopsy to confirm the diagnosis.

What are the symptoms of vocal nodules?

Vocal Nodules are a common cause of voicing difficulty (also known as dysphonia). Because they interfere with the normal vocal fold closure and vocal fold vibration, people with vocal nodules often complain of painless hoarseness i.e. a rough and breathy voice. The hoarseness of nodules tends to get worse with voice use and improves with voice rest. People with vocal nodules often find their voice is worse towards the end of the day, after a night out with friends or after a demanding vocal performance. This is because vocal nodules swell or increase in size when strain is placed upon the vocal folds and shrink when they are given rest. Singers with vocal nodules may typically find that they have a breathy voice, are requiring more vocal effort, experiencing vocal fatigue or having difficulties holding a note in the higher pitch range.

Vocal Nodules can impair one’s ability to speak and communicate effectively. For the professional voice user this can have a serious impact upon their ability to work,  generate income and progress in their career. In this group, the psychological trauma of being diagnosed with nodules can be very significant and have a detrimental effect on one’s quality of life. In singing and acting circles, professional voice users often dread the diagnosis of nodules. They may worry (often incorrectly) about a negative impact upon their career.

By definition, vocal nodules are always bilateral, symmetric lesions at the midpoint of the vibrating portion of the vocal folds. This location is characteristic of lesions due to phonotrauma as it experiences the greatest forces of vocal fold vibration. They may vary in size from patient to patient and may get bigger or smaller depending how much stress is placed upon them. They are broad-based and usually the same colour as the rest of the vocal fold, appearing as a bump on the edge of the vocal fold. They can impair the ability of the vocal folds to come together completely, creating a characteristic “hourglass” closure pattern, thereby causing air escape and breathiness.

Unilateral lesions are not vocal nodules by definition. Bilateral asymmetric lesions should raise suspicion of another diagnosis. Usually close examination with laryngoscopy and videostroboscopy will reveal these lesions to be cysts or polyps with resultant thickening of the opposite vocal fold as a reaction. The presence of vocal nodules in men should always prompt close examination to look for another pathology.

How are vocal nodules treated?

Voice rest will cause vocal nodules to reduce in size and soften. This will usually improve voice quality, but tends to be a temporary treatment and they usually recur with the next episode of heavy voice use. Treatment of vocal nodules (voice rehabilitation) requires the underlying patterns of inappropriate vocal behavior to be identified and modified. This is best done under the guidance of a Speech Pathologist.

Voice therapy is the current gold standard of treatment for vocal nodules. It aims to educate the person about appropriate vocal hygiene and make them aware of patterns of voice use that exacerbate the problem. The Speech Pathologist, in conjunction with the patient, will find strategies of voice use to minimise the problem. Vocal Nodules will almost always improve with appropriate voice therapy. Sometimes they will regress completely but the goal of voice therapy is to keep the nodules small and soft and allow optimal voicing in the long term.

Occasionally phonomicrosurgery is required in the treatment of recalcitrant vocal nodules. Surgery in not indicated unless the underlying factors contributing to the problem have been adequately addressed as they will re-form after surgery in the same conditions. After adequate voice therapy there may be a residual firm mass which continues to have a negative impact upon a person’s function. Using careful microlaryngoscopic techniques, this tangled fibrous tissue can be carefully removed in the operating room by an appropriately skilled surgeon. However, the risks of permanent scarring after this type of surgery and expected voice outcome should be balanced against the current level of voice production and the negative effect of the vocal nodules.